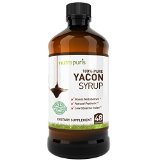 Yacon syrup is derived from a delicious root crop has been grown in the Andes by the Inca and their descendants. Related to sunflowers, Yacon has large succulent roots that have a juicy, watermelon flavor. From this we produce an exceptionally sweet syrup which can be used like honey or maple syrup.

You search is finally over for the finest traditional botanical available on earth. This botanical is a long standing favorite in South America where it has been empirically selected for its effectiveness over many generations.

Get ready for the ultimate low-glycemic sweetener! Unlike sugar, honey and even agave syrup, this natural nectar won’t spike your blood sugar levels.

Yacon’s sweetness comes from low-calorie, low-carb FOS (fructooligosaccharides) that taste sweet but won’t affect blood sugar levels. FOS can’t be digested and absorbed into the body, so they don’t have the effect on metabolism that other sweeteners do.

More than just a sweet-tooth pleaser, FOS are known to promote vitamin absorption, regulate metabolism and act as a prebiotic by stimulating growth of friendly intestinal flora.

Grown in the nutrient-rich soil of the Peruvian highlands, our bacon root is delicately fresh-pressed and dehydrated to bring you this rich, molasses-like superfood syrup the way nature intended!

Suggested Use – use one spoonful of Yacon Syrup any way you would normally use honey, maple syrup or molasses. Yacon syrup adds a fruity, honey-like flavor to most foods or baked goods. Use in place of honey for cooking, as a topping over yogurt, cereal or to sweeten juices and smoothies.